Yes, I've been waiting my whole life to make a post title like this.
But seriously, if you haven't been hiding under a rock this morning you will have noticed the internet go crazy for the detection by BICEP2 of tensor modes, the 'smoking gun' of inflation. Even the NYTimes got in on the action.

The B-mode polarisation spectrum is shown here below, where all the other limits are just that, upper limits. This is pretty awesome if you think about how this fits in with all the efforts of so many. 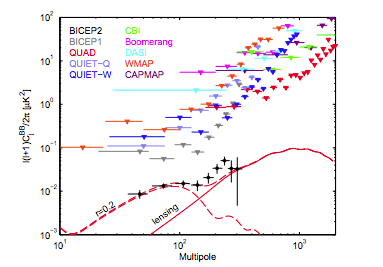 Figure 1. The BB-mode spectrum from BICEP2 with previous data.

This detection is really exciting, and has implications not only for the specific theory of inflation and the kinds of models it supports - it also allows us to place constraints on other physics. For example, my colleagues David Marsh, Dan Grin, Pedro Ferreira and I wrote a paper investigating what the detection would mean for axion-like particle dark matter. Such a large value of r places a constraint on the energy scale of inflation, H_I, which in the axion model place constraints on the initial misalignment angle - leaving a model that has a high level of fine tuning (fine tuning in physics is generally considered a bad thing, you don't want to have to tweak your model to give you something reasonable, you want that reasonable thing to emerge organically). If we consider very light axions, then this constraint on r tells you about the fraction of the total dark matter that can be made up of these axion-like particles (as a function of their mass). 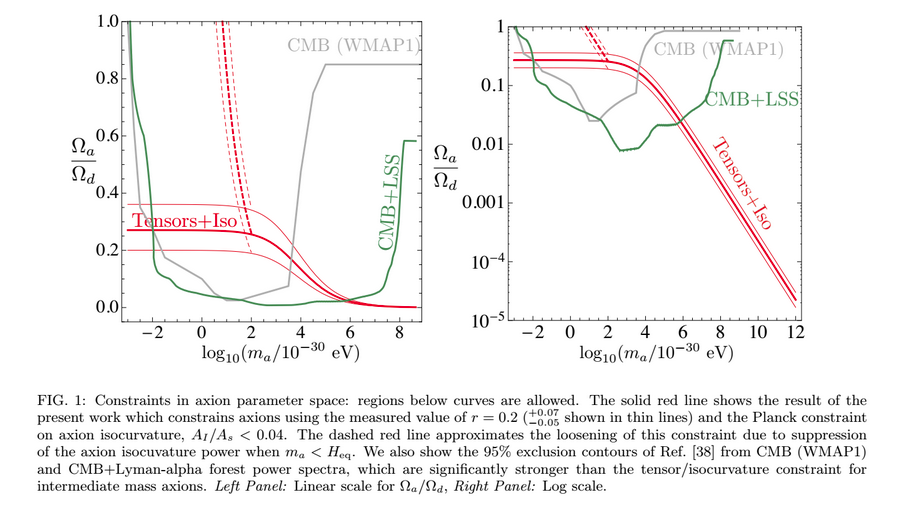 We show that this new constraint (indicated by the red curve) limits the fraction of the dark matter that can be made up of axions... which helps us rule out parameter space (which is a good thing!) You can read all about it here.

While the claimed detection of B-modes from BICEP2 is awesome and very exciting, it is also important to remain skeptical about possible systematics and issues with the detection. It is a very tough game, and such an important result that we need to make sure we pass all the possible tests we can throw at it. I for one am a little worried about leakage between temperature and polarisation in the spectrum. If you look at the cross-correlation between this measurement and the BICEP1 data, it seems that there is excess power on small scales (large multipoles). 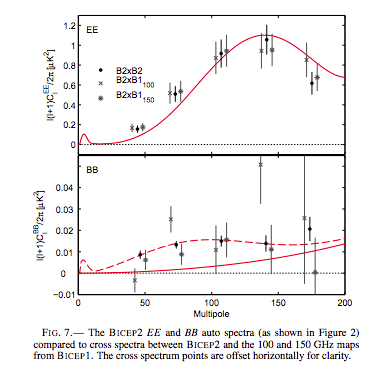 Now it bears repeating that the BICEP2 result on r is only based on the scales between 30< ell<150, but these high ell issues to need to be addressed, as leakage could bias your signal high (make the evidence for tensor modes stronger).
Another thing to worry about are foregrounds. The team have presented reasons why they think foregrounds are not an issue for a signal so large, and it looks like they've done their homework, but I'll spend the next few days digesting the paper in more detail.

Also, this is such a large signal that we need to think about why other experiments have not seen it. In fact, if you consider the figure below from their paper: 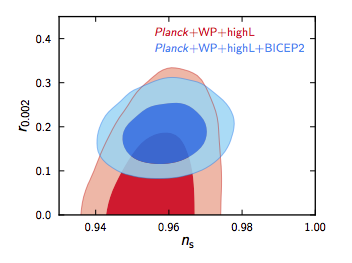 you might be worried about a conflict with the results presented by the Planck team last March. First of all this plot is made by marginalising over running of the spectral index, so it is beyond the "vanilla" model + tensor modes (it has another parameter in it, the running of the spectral index, which gives it two free parameters relative to the base LCDM model without tensor modes at all).

So, the bottom line: I am excited by this (and so should you BB!) but there is more to understand and this result needs to be battle tested and confirmed. Long life the scientific process!!